I’m the owner, Pam Lake, a professional dog trainer, breeder and groomer who has owned and bred German Shepherd Dogs since 1983 and Cairn Terriers since 1998.

“The Breeder of Merit Program honors breeder/exhibitors’ dedication and hard work as they continue to produce dogs that are healthy, capable, and beautiful

The foundation of today’s AKC, Breeders of Merit have the power to influence, guide, and teach future breeders, exhibitors, and all purebred dog owners.” 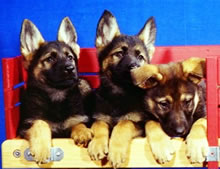 I was lucky enough to keep one of my foster dogs that was released from their program. It was the perfect dog for me to take with me to dog training school where I trained her in all areas as a demonstration dog for my business.

After working with Uta and falling in love with the breed because of their intelligence, loyalty, dedication, versatility and loving nature, I looked into breeding them. I ended up specializing in the DDR/East German bloodlines because of their looks, temperament, trainability and health.

Because of the strict breeding selection measures in the former DDR, the current “East dogs” will catch anyone’s eye because of their dark pigment, strong, heavy bone structure and stocky builds. These lines also tend to be much more healthy and lack the kind of issues that other lines have. The German Shepherd Dog that has developed in former East Germany with the big bones, broad heads, well balanced character, beautiful rich dark colors, is no phenomenon!! This type of German Shepherd Dog has been very unique and I wish to keep this for the future. So as a lover and admirer of the DDR/East German Shepherd Dogs, I want to preserve what is left of these wonderful dogs and their rare bloodlines. I also have added the Czech bloodlines because they are the same type and carry many of the great DDR/East German Dogs in their pedigrees. 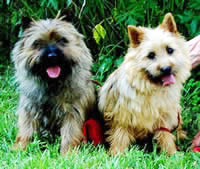 I started breeding Cairn Terriers in 1998. I bought 3 sisters from one litter in 2000 to start my breeding program. They came from excellent show pedigree from England and the United States.

As a person who really loves big dogs, I was surprised at how much I really liked the Cairn Terriers because they are hardy, tough and very happy, social dogs. They also get along well with my German Shepherds and share the same love of retrieving, swimming and guarding.

I am not a big show breeder. I do have excellent champion show bloodlines and will show some dogs that I feel deserve to show. My goal is to breed quality, healthy companions for families that have the excellent backgrounds with show lines.

We are proud to say that German Shepherd and Cairn Terrier owners from all over the U.S. are some of our loyal customers.

All of our breeding stock for both breeds have excellent temperaments, are clear on genetic issues and love people. We import a lot of our dogs and keep some from our own litters.

Take a look around our site for information and pictures!